Madden 22: You Can Get A College Feel With The Campus Legends Mode

Although there is no official announcement, GAMEMS has learned some related news about Campus Mode, including what it will look like and when it will appear in the game.

Campus Legends is perhaps the most exciting new content in Madden 22, and this game has just been released, which makes gamers even more excited.

The new trailer released by EA shows that Campus Legends will bring back college football prodigies from different eras to Madden 22. This will be the first time that Madden has been authorized by NCAA college athletes. This will be the key to EA’s upcoming College Football game.

EA Sports College Football 24 will not be released until at least 2023, and now Madden 22 seems to be able to let gamers experience this feeling in advance. Reggie Bush took photos of himself, Matt Leinert, and Vince Young on INS, which is a special Rose Bowl throwback that shows Campus Mode. 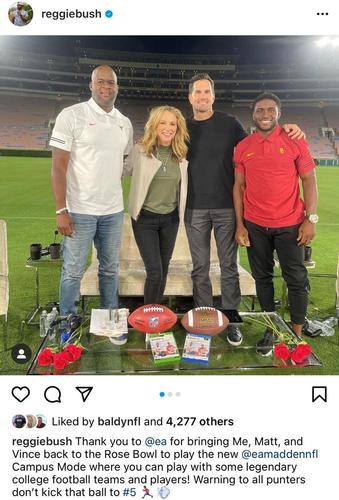 Although there is no more content, with the EA Madden NFL account sharing the teaser, things gradually surfaced. In addition, we also saw some shared trailer pictures and videos, highlighting players wearing college uniforms and some college actions in the game.

We already know that there are several campuses (schools, colleges) in Madden 22 and signed an agreement with EA, because they can be selected in the Face of the Franchise:

So today there will be something new coming soon! More specific content needs to be experienced by players themselves. If you need to buy Madden 22 Coins, just come to GAMEMS.

Next: Madden 22: Campus Legends Roster Has Been Announced
Previous: Madden 22: How To Pull Off The Touch Pass?